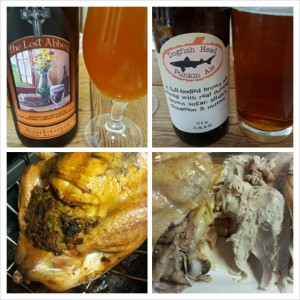 The beers were good, the turkey was awesome, the two together were fine.

To decide which beer pairs best with Thanksgiving turkey we decided to try a couple different styles. The first style we tried was a Biere de Garde. According to most experts, Biere de Garde is the best style for any Thanksgiving food item. It supposedly can pair well with turkey, cranberry sauce, pie, anything that you might find on a Thanksgiving table. We wanted to compare the Biere de Garde to a Pumpkin Ale. Pumpkin Ales are a seasonal style that are very popular during Halloween and Thanksgiving and they seem like an obvious choice for the holiday dinner.

The Biere de Garde we decided to try was the Avant Garde by The Lost Abbey. According to the brewer, Avant Garde has “hints of biscuits, caramel and fresh baked bread.”

I felt that the Avant Garde was a good beer. It’s a style I’m not terribly familiar with so I wasn’t too sure what to expect. It was smooth and well balanced. I was definitely able to taste some fruitiness, particularly apples.

The Punkin Ale is brewed by Dogfish Head Brewery. The brewer describes the beer as “a full-bodied brown ale with smooth hints of pumpkin and brown sugar.”

The Punkin Ale is one of the best Pumpkin Ales I have had. It’s so popular that if you’d like to pair this beer with your Thanksgiving dinner you should stock up as soon as you see it on shelves. The Punkin Ale has a wonderful blend of spiciness and pumpkin. It’s certainly a Pumpkin Ale but it’s balanced very well so it doesn’t taste like you just swallowed a mouthful of cinnamon and nutmeg. The spiciness and pumpkin flavors blend very nicely together and give you a very drinkable beer.

The turkey was awesome. I’m really not a big turkey fan but this turkey was fantastic. The turkey was brined, meaning it was soaked in salt water for about a day prior to cooking. The turkey was super moist and tender. Now that I’ve eaten a brined turkey I don’t think I could ever go back to the typical dry turkey.

How was the Avant Garde with the Turkey? The answer is: okay. The turkey seemed to make the beer slightly off balance. The beer wasn’t terrible but it certainly tasted better without the turkey.

How was the Punkin Ale with the Turkey? The answer is: good. The turkey with the beer seemed to make no difference to either flavors. Though it didn’t really enhance either it also didn’t detract from either so overall it was a good combination.