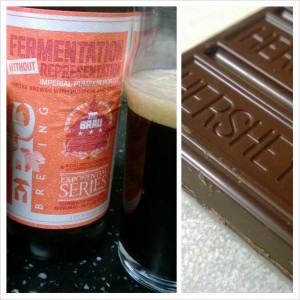 The Beer: Fermentation Without Representation

This was my first experience with Fermentation without Representation and I immediately felt it was a delicious beer. The taste had some pumpkin spice / nutmeg flavor to it but it was not an overwhelming amount. It was a very smooth, tasty porter and was not overpowered by the spices.

We decided to keep the pairing simple and sweet so we had some dark chocolate. Nothing terribly fancy, just a Hershey’s dark chocolate bar, but good nonetheless.

The big question is: how was the beer with the food? The answer is: good. The pairing slightly improved the beer. It rounded out the edges a little more without detracting from the spices. Overall, this was a very nice pairing and one that would be tasty the entire holiday season.