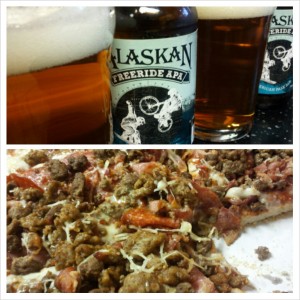 The beer was great, the pizza was good, the two together were bad.

The Freeride APA is a very drinkable session beer. It is an excellent go-to beer; it is well rounded and smooth with just a slight hoppy bite. Freeride is just what you would want and expect from an American Pale Ale.

Pizza is always a great food item, especially to try pairing with beer. This particular pizza wasn’t the best but it was still good. The crust was a little thin and crispier than I would have liked, though that was to be expected with a take-n-bake pizza.

The big question is: how was the beer with the food? The answer is: bad. The combination of the pizza and the Freeride APA made the beer slightly worse. It added a bitter aftertaste that took away from the original balance of the beer. It didn’t ruin the beer, it was still an enjoyable meal, but the beer did have a better flavor before the pizza got involved.