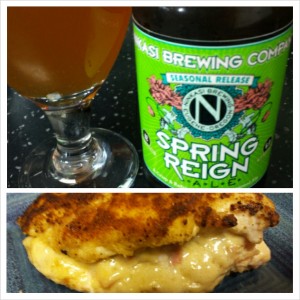 Ninkasi Brewing describes Spring Reign as “a lightly toasted British-style malt flavor balanced by bright Northwest-style hops”. They also claim that “it’s a session beer that everyone can enjoy”.

Now, as a general rule of thumb, everything from Ninkasi is great! This beer holds true and is a very good beer. There are a lot of hops right up front, it really wasn’t what I would expect from a blonde ale but certainly lives up to the description by Ninkasi. This beer was much better than expected.

We paired it with ham and cheese stuffed chicken. The chicken was pretty good, which is saying a lot because chicken is really pretty boring. However, cheese makes everything better.

The big question is: how was the beer with the food? The answer is: good. The two went good together but not great. The pairing likely would have been a little better if we had left the spicy mustard out of the ham and cheese stuffing. The spicy mustard seemed to give the beer more of a bite which through off the balance a bit. It wasn’t bad and didn’t ruin the beer, it just wasn’t quite the flavor you’d expect.