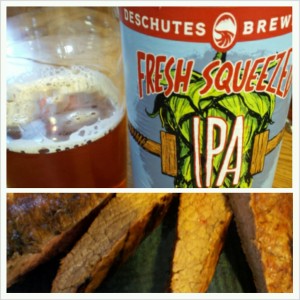 The beer was great, the steak was okay, the two together were bad.

The Fresh Squeezed IPA is brewed by Deschutes Brewery in Bend, OR. According to the brewer, “this mouthwateringly delicious IPA gets its flavor from a heavy helping of citra and mosaic hops.”

The big question is: how was the beer with the food? The answer is: bad. The bloody mary flank steak seemed to remove the citrus flavor from the beer. It left a sharp hoppy flavor. This was really disappointing because the citrus flavor had made the beer so enjoyable to begin with. This is definitely not a pairing I would recommend as it ruins a great beer.