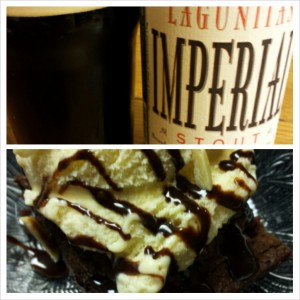 The Food: Brownie a La Mode

The beer was good, the brownie was awesome, the two together were fine.

The Lagunitas Imperial Stout starts with a chocolate aroma. The flavor profile includes notes of dark chocolate, espresso, and a bit of a caramel flavor. Overall, this is a good beer and one that I will likely have again.

The brownie a la mode was fantastic. How could it not be? A fresh baked brownie with vanilla ice cream and chocolate syrup; three great food items wrapped into one.

The big question is: how was the beer with the food? The answer is: fine. The brownie flavor didn’t enhance the beer or vice versa, though they also did not impair each others flavors. The flavors really didn’t change at all so the end result is a good beer and awesome food.