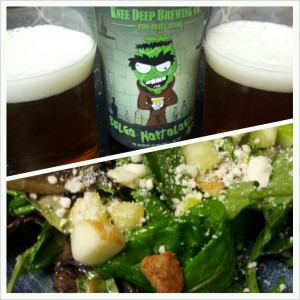 The beer was good, the salad was okay, the two together were fine.

The food we decided to pair with the Belgo Hoptologist was a blue cheese salad. The salad was a pre-packaged salad that included the dressing and all of the ingredients. You can literally just toss everything together and have a decent salad. It’s quick and simple and tastes okay.

The big question is: how was the beer with the food? The answer is: fine. Surprisingly, the strong flavor of the blue cheese did not take away or add to the beer. The two went well together but neither flavor seemed to change, they both kept their own independent flavor.

Though this pairing isn’t worth rushing out and buying, if you have the two items at home there is no reason not to pair them.