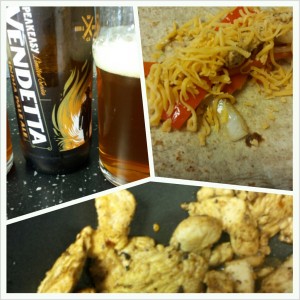 The beer was great, the fajitas were good, the two together were fine.

Vendetta IPA is brewed by Speakeasy Ales & Lagers in San Francisco, CA. The Speakeasy IPA that you are likely familiar with is the Big Daddy IPA, one of their flagship beers. I have tried the Big Daddy IPA on several occasions and it is fine, nothing too special in my opinion, but the Vendetta IPA I would gladly have some more of.

The Vendetta IPA was a very good beer. It had lots of hops right up front. It was exactly what I’d expect from an American IPA and it was very drinkable.

The chicken fajitas were good. Of course, they would have been better with steak instead of chicken but it was still a good meal.

The big question is: how was the beer with the food? The answer is: fine. This pairing was good because it was great beer with some good food. However, the taste was pretty much the same when you paired the two together. With that being said, I would certainly have it again but no sense in making a special trip to the store to get fajitas to pair with your Vendetta IPA since it’s still just as great on it’s own.