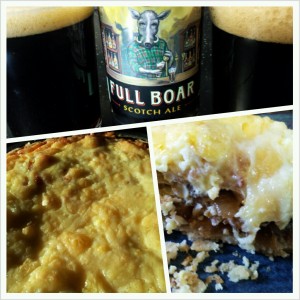 I haven’t had many, maybe not any, scotch ales so I wasn’t sure what to expect from this beer. After my first sip, it was clear that Full Boar is a very good beer. It was very smooth and you can certainly taste the chocolate and caramel notes. The only down-side to the beer in my opinion was that you could taste a bit of alcohol astringency.

The quiche was very good. Does anything with bacon not taste great? I don’t think so. It was pretty simple to make though it was a little time consuming.

The big question is: how was the beer with the food? The answer is: great. The quiche removed the astringent alcohol flavor in the beer and enhanced the chocolate notes. The entire beer was rounded out even more wonderfully than it had been before. The end result was wonderful, and definitely worth trying.