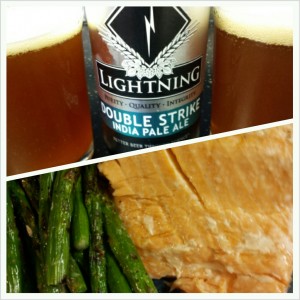 Details: Alaskan salmon steak fillets cooked on the grill in foil with butter and lemon slices.

The beer was good, the salmon was okay, the two together were fine.

Double Strike is an Imperial IPA from Lightning Brewery. According to the brewery, “Lightning’s exacting and unique brewing and fermentation processes create a deeply satisfying beer that is both dry and malty.”

This was my first experience with Double Strike. The first thing I noticed was that the beer had a bit of a caramel aroma to it. Double Strike was very malty right up front and then the aftertaste was full of a hoppy bite. I thought it was a good beer but the caramel maltiness seemed to set it apart from the other Imperial IPAs I have tried.

The salmon was okay. It seemed a little bland to me. It was cooked simply with lemon and butter. I think it could have benefited from some garlic and maybe some salt and pepper.

The big question is: how was the beer with the food? The answer is: fine. The Double Strike IPA and the salmon were fine together. Both the beer and the salmon flavors seemed unchanged when they were paired. The pairing was fine, but not terribly exciting.