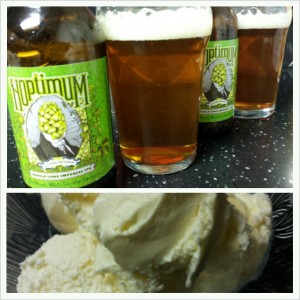 Hoptimum Imperial IPA is brewed by the Sierra Nevada Brewing Company in Chico, California. Sierra Nevada describes this beer to have “intense hop flavors and aromas of grapefruit rind, pine, herbs and tropical fruit”. They also add that “Hoptimum is an aggressive drinking experience”.

I, personally, have become a big of the imperial IPA style recently and Hoptimum doesn’t disappoint. Hoptimum is a good beer and comes across as both very hoppy yet malty right up front. The beer is smooth and well balanced but it definitely includes a bit of a bite. I would say this beer is very drinkable but at 10.4% ABV I don’t know how many I’d be able to drink.

Now, I was very nervous to try this pairing. I know the beer is a good beer, and ice cream is delicious, but I didn’t see how this pairing would be good. I was very concerned that I’d waste my beer and ice cream by trying to pair them. I decided to be a man about it and just try it because Sierra Nevada actually recommends pairing hoptimum with french vanilla ice cream so it must be worthwhile.

The big question is: how was the beer with the food? The answer is: great. The combination of the beer and the ice cream did seem to slightly enhance the beer. The ice cream added a bit of creaminess to the beer and helped round out the rough edges that are included in this “aggressive drinking experience”.

Overall, this was one of the most interesting beer and food pairings I have tried. I would definitely recommend this pairing. We all know that stouts and vanilla ice cream pairs great but now we have an imperial IPA that we can add to the list.