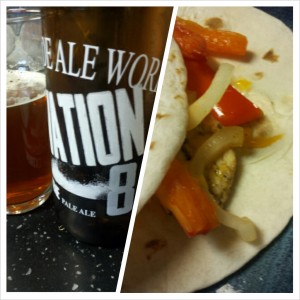 The beer was good, the fajitas were good, the two together were bad.

The beer Elevation 83 gets it’s name because Oceanside Ale Works is 83 feet above sea level. The beer matches the elevation by having 83 IBUs and 8.3% ABV. The brewery categorizes this beer as an “EXTREME” pale ale.

Elevation 83 was definitely a good beer. It was very well balanced and very drinkable. At the same time, nothing really made this beer stand out to me and I’m not sure that I would classify it as “EXTREME”.

The fajitas were good. They were just simple chicken fajitas with red peppers and onion. We had them with flour tortillas and some cheddar cheese. They were good but would have been better with steak.

The big question is: how was the beer with the food? The answer is: bad. The combination made the beer slightly worse. It gave the beer a crisp finish which was bad because without that long finish the beer wasn’t as well balanced. It wasn’t horrible but that nice balance is really what made the beer.