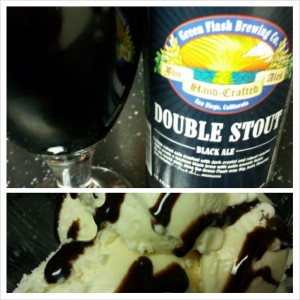 The Double Stout is a pretty good beer, we’ve had it a few times and will likely have it a few more. It has a complex flavor, it’s hard to pinpoint the different tastes but there seems to be some chocolaty flavor in there somewhere. The beer has a bit of a bitter finish but overall it is a good beer.

We paired it with some classic vanilla ice cream. We added some Hershey’s chocolate syrup on top. It was delicious! I know I’ve said it before but you just really can’t go wrong with ice cream.

The big question is: how was the beer with the food? The answer is: great. The ice cream removed that bitter finish from the beer and rounded out the whole flavor. A good stout with some ice cream is definitely one of my favorite pairings and this particular match certainly does the trick.