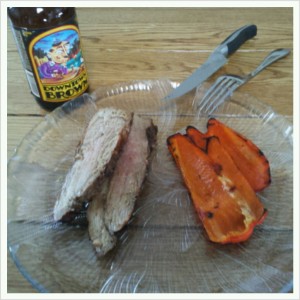 Downtown Brown is a good beer. It’s moderately easy to find and has a nice smooth flavor.

The pork was also very good and easy to cook. We just put it on the grill for about 25 minutes. We cut up some red peppers and put them on the grill with some salt and pepper as a side.

The big question is: how was the beer with the food? The answer is: great. The two items together paired very nicely. The beer and the food alone were good, but together they were especially delicious. The peppercorn really seemed to enhance the flavor of the beer. The beer alone was good but with the pork it seemed smoother. I would definitely recommend pairing these two.